In Summer 1940 the skies primarily over Kent
Saw the largest airborne battle that a war had ever sent
We looked skywards at this point and never really knew
How much we’d owe these pilots, the brave, the young, the few

We defended our small island from an imminent land invasion
Determined never to become part of Hitlers fascist nation
We all dug deep, the folks at war, the girls and boys at home
Everyone made sure that know one felt alone

The war was long, six long years, we battled as a nation
We held our own then in 44 Churchill had an inspiration
He joined us with our allies determined to give one last push
It focused on the beaches of France but he would never rush

History showed that sometimes a plan just doesn’t work
We were all still smarting from the trauma of Dunkirk
We had four years to plan this, to try and get it right
We had one last chance to hit Hitler with all of our might

The battle was brutal, my grandad landed that day
I asked him quite often but he would never say
What actually happened but I could see it in his eye
He actually really questioned why he didn’t die

But he didn’t, he fought on like thousands of others
With his friends his comrades, his band of brothers
He saw brutality and death, I know I couldn’t cope
They all did it for us, to give us all new hope

So I ask you on this day of national thanksgiving
To raise a glass to the dead and all those still living
They fought for us hard and I’ll always regret
If I forget their sacrifice…. Lest we forget! 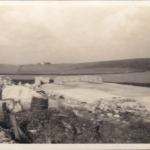 Next Story:
Flash Village Hall – In the beginning