So we began to attend Flash school. I believe there were about forty pupils then. Two class rooms with sliding doors between, infants in one section, and the over eight in the other. Miss Edith Beswick taught the little ones, and I think our first headmaster was Mr. Cooper, who lived in the school house, which is where the post office is now (The cottage next to the new Inn). Every morning the first class was Scripture, and we always sang a hymn, and had to learn all the commandments and the Catchism by heart. I liked the English lessons with spelling and dictation and poetry. Lots of arithmetic and tables to learn, drawing, and sometimes we were taken out to sketch a scene in the countryside, and later colour it in from memory with pastels.

I sat on a form with two other girls, Daisy Goodwin from the Manor Farm, and Olive Wain from Birchenbooth, we were nicknamed the three Graces, and often chatted too much and were told to stand on the form with hands on head.

After Mr. Cooper left we had a headmaster called Mr. Sparks. He used to take us for nature walks when the weather was fine, and we made notes and sketches of flowers. We also had a strip of garden in a field, and we had lessons on how to grow vegetables and salad. Mr. Sparks also taught us to play rugby – he played for the girls against the boys. It was very rough, but I loved it. I had long plaits in those days and the boys used to hang on to them.

In school were big coke stoves for heating, with a rail guard round, where wet outdoor clothes dried, for those children who lived at Gradbach and further away had a very long wet walk in winter. Miss Beswick taught us sewing, and we had exercise books in which we pasted samples of embroidery, chain stitch, hem stitching, French knots and calico and flannel patches. She used to rap us lightly on the head with her thimble when we misbehaved. 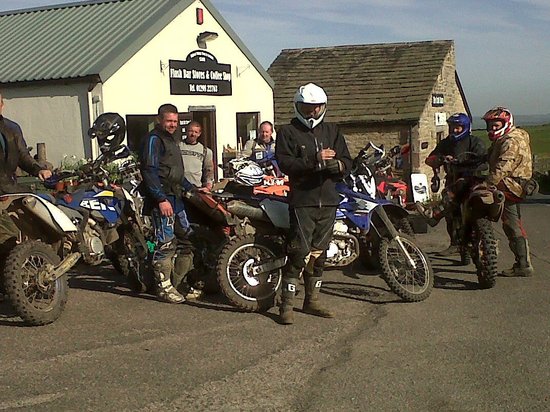